In the last few days there has been an interesting and slightly bizarre trend sweeping over the internet; the #KylieJennerChallenge. But what does this trend say about celebrity culture, surveillance, and identity performance online?

In order to answer this, a bit of context is first needed. Kylie Jenner is what Wikipedia defines as a ‘television personality and socialite’. A member of the Kardashian family, Kylie is a 17 year old who is very much in the public eye. Her clothing, hairstyle, appearance, personal life, and much much more is constantly on display to members of the public, both through her own output on Social Media and in other Media appearances, and through third-party exposure through gossip mags, paparazzi, and the myriad of people discussing and debating Kylie and her family.

One major topic of particular interest to those interested in her life lately has been Kylie’s lips. Apparently they use to be small, and now they are not. (At this point, there is a very interesting tangent that I will stop myself from going down, to do with newsworthiness, how news stories are selected, and how much prominence they are given. Suffice-it-to-say that given the rise of Social Media, clickbait headline, and the 24-hour news cycle, there is a desperate need for a thorough and complete overhall of Gatling and Ruge’s useful and much-cited, but unfortunately outdated 1965 article on the newsworthiness and the selection criteria for news items). Regardless of the reasons for this change, it has been reported that one of the methods she uses to achieve this effect is to suck her lips inside a shotglass, increasing bloodflow to the lips, and resulting in a pronounced pout.

Cue a string of imitators, and one hashtag later, the results are this: 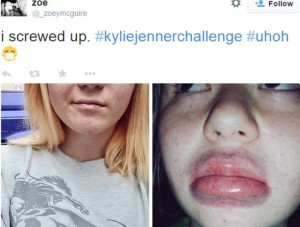 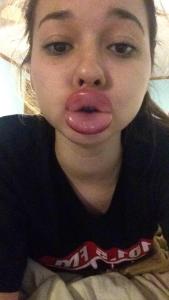 This is potentially worrying and/or hilarious depending on who you are, and again, I will avoid heading down yet another tangent into a much needed discussion on body dysmorphia and modification, increasingly unattainable standards of beauty, gender performances, the increasing value placed upon celebrity appearance and imitation, and the beautification of the unattainable, the unnatural, and the unrealistic.

However, it also poses some interesting questions in regards to the Digital Panopticon. Briefly explained, the panopticon is a theory of surveillance and social conditioning proposed by Foucault, and based upon a prison design by the enigmatic Jeremy Bentham. It proposes that society will police itself into conformity to social expectations if they believe that they are always being seen, and that there is always the potential of their actions being observed. If at any time we are being viewed and judged, we are more likely, Foucault argues, to comply with social expectations, and to perform identity in an accepted manner. We essentially police our own actions, interactions, and identity performances, and in turn, give credence, power, and viability to many otherwise socially constructed Discourses of normality and socially appropriate behaviour.

On the face of it, the panopticon seems to apply rather aptly to Kylie Jenner’s situation. Our society is constantly being observed, through CCTV, crowded cities, and ever growing social media apps. With everyone potentially being watched there is a large amount of pressure to conform to ever-increasingly stretched standards of beauty. So much so that we hold distorted and contorted figures of beauty up as potential ideals, and in turn attempt to emulate this often unattainable standard of beauty.

However, Foucault’s Panopticon is built upon the idea of the few, often in elevated positions of power, potentially watching the many, who begin to police themselves into conformity. In the case of Kylie Jenner, this is patently not true, in fact, it is quite the opposite; the many watching the few. This is known as a Synopticon. As we increasingly hold individuals up as potential figures of ideal femininity and beauty, we flip the Panopticon, and instead begin to place the few with power in the observed cells of the Panopticon, with their actions and performances being scrutinized by the public as embodiment of Social Discourses. This is something seen time and time again with many ‘Celebrity crises’ – think Beiber, Britney, Lohan, Bynes, the list goes on and on. Kylie is under intense scrutiny by the public writ large, she is constantly being observed, with the potential to be viewed at any time, and is under pressure to perform identity correctly. Whenever she veers away from the socially accepted and perpetuated Discourses of normality, she is greeted with public discussions dissecting and criticising her flouting of convention. This continuing discussion of her performances has led to large importance being placed upon her body, and upon her identity. Kylie seemingly is aware of the potential panopticon viewing her, and is not only policing her social actions, but also (potentially) changing and policing her physical body and her physical features.

This would seemingly be the end of the matter as far as a panopticon/synopticon was concerned, if it were not for the #KylieJennerChallenge. This adds another level of surveillance to the mix. The rise of Social Media has in many ways lead to a levelling of the playing field, with everyone given the chance to be observed, and to engage in observation. It is no longer the few watching the many, nor the many watching the few, but the many watching the many. We are all watching, and are all, to varying degrees, being watched. There are so many platforms (vine, youtube, twitter, facebook, Instagram, tumblr, etc etc etc), with so many people on them that everyone has the chance to be the observer, but equally, everyone is potentially being observed.

This plethora of voices and platforms of exposure leads not only to an emulation of Social ideals and a drive towards conformity of these social ideals in both in action and in physical appearance, as can be seen in the desire to make oneself look like Kylie Jenner, but also, interestingly leads to a culture of one-upmanship.

In order to be heard above the drone of noise, and in order to gain a coveted place in the cell of observation and public scrutiny, there is a seemingly growing trend of increasingly extreme behaviour. With increased exposure comes the need to stand out from the crowd, and as such we see people pushing further and further towards more extreme behaviour in order to gain exposure. Be it in an attempt to emulate beauty ideals, or to elicit laughs, everyone is scrambling to be heard, and scrambling to be the person being viewed. This leads to a culture of extreme performances, people pushing the limits and the boundaries in order to get noticed, people doing things that are seemingly bizarre. Like this:

SO perhaps it is best to put the idea of a digital panopticon to bed, and instead, begin to think about the implications of the increased exposure that the growth in Social Media has bought about.

If you ask me, they all begin to look a little like Miranda Sings, which is interesting given that she is a character designed to ridicule some of the social ideals and Discourses so heavily entrenched in society, and to push these ideals to their absurd conclusion. Perhaps Miranda sings is a post-structuralist scholar way ahead of her time, pointing out that in order to be seen, we are willing to push ourselves into being absurd pastiches of the very culture we are emulating… I’ll leave you with a picture of our scholar to mull over her contribution to the ongoing discussion of the Digital panopticon….

One thought on “Theorising the #KylieJennerChallenge, who is watching who?”

Harry is a Digital Sociologist with experience and passion for teaching a wide range of social theories, methodologies, and practices at undergraduate and postgraduate level. He leads lectures and seminars in a wide range of subject areas including Media and Education, Ethical Research Methods and Practices, and Social Science Methodology.

© Harry T Dyer and HarryTDyer.com, 2018-19 Unauthorized use and/or duplication of this material without express and written permission from this site’s author and/or owner is strictly prohibited. Excerpts and links may be used, provided that full and clear credit is given to Harry T Dyer and HarryTDyer.com with appropriate and specific direction to the original content.